TOKYO, JAPAN– September 23, 2016 – EnglishCentral, the leading provider of online English conversation solutions, participated with the Japan’s Minister of Internal Affairs & Communications, Sanae Takaichi, as she inspected an English class at a Tokyo Elementary School as part of the Ministry’s  plan to promote the use of information technology in the classroom called “Creating the Learning Environment of the Future” .

As part of her visit, she joined the school’s English class and tested out  EnglishCentral interactive speaking technology IntelliSpeech℠ using a Chromebook Tablet device. 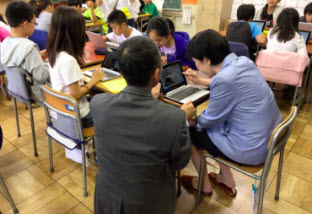 The Maehara Elementary School in Tokyo is aggressively using new technologies to motivate student to study English.    For the class visited by the Minister, the students were using an interactive, video-base version of the English textbook “Hi Friends!” published by the Ministry of Education and adapted by EnglishCentral for use on the Chromebook tablet.

Minister Takaichi commented, “This program is well designed for the school because it helps improve students’ speaking ability, including their pronunciation, as well as makes it easy for teachers to monitor students’ speaking progress at a glance.”   The school is also using EnglishCentral’s learning management system (LMS) that allows teachers to monitor student progress and even listen in on their speaking practice sessions. 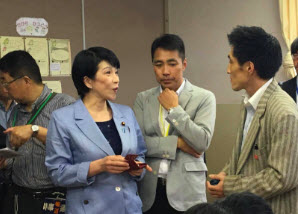 The Minister  actually tried the EnglishCentral program herself in the classroom, sitting next to children in the class.  She noted that children who practiced their pronunciation operating tablets by themselves seemed to speak English quite fluently using EnglishCentral.

Hirofumi Matsumura, General Managers of EnglishCentral  Japan,  commented “there is nothing that makes me happier than seeing  Japanese children improving their English speaking using the EnglishCentral platform.  It’s a true honor for the Minister to have visited this class and tried out EnglishCentral herself. I feel there is a revolution happening in Japan English education, moving from a traditional grammar based curriculum towards a curriculum that emphasizes real listening and speaking skills that students can really use in real life.   We are happy to contribute to that revolution with our EnglishCentral platform.”

EnglishCentral is the most widely adopted online English language conversation platform in the world, changing the way students and professionals across the globe learn to speak English. Adopted by over 400 universities, schools and corporations in over 100 countries, the company delivers interactive, video-based language learning experiences for both self-study and one-on-one tutoring, providing one of the most widely adopted and complete platforms for practicing and mastering English conversation online. Its extensive library of videos lessons, proprietary IntelliSpeech℠ speech assessment technology, and pre-built course modules guarantees results for English as a Second Language (ESL) learners. EnglishCentral partnerships include the world’s largest private and online English language schools including Open English (Latin America), UOL(Brazil), NTT Learning (Japan), and Meten (China), Learn more at  www.englishcentral.com of find us on Facebook/EnglishCentral or Twitter at @EnglishCentral1.