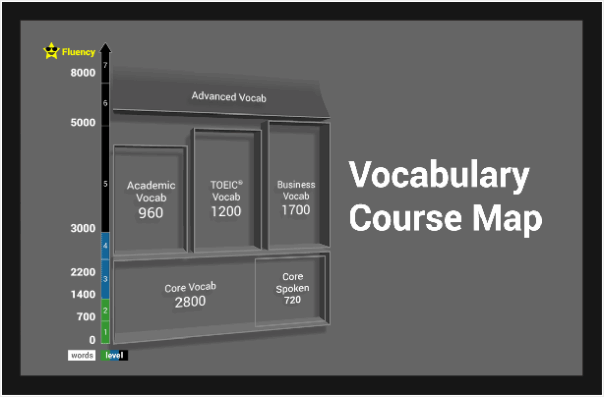 We recommend that students complete all words in all units of the Core Vocab. Vocabulary Lists are divided into quizzes of 20 words, which take approximately 3 minutes per quiz, depending on the student’s level.

We recommend teachers assign one Unit each week for 100 new words per week, or about 20-30 minutes of study time per week.   In a one year-program (28-week program), 100 words per week means about 3000 unique Words (Core Vocab, plus Academic Vocab or TOEIC)  can be covered in the full year.

We provide a Vocab Level Test as a diagnostic test of knowledge of the Core Vocab (NGSL) and Academic Vocab (NAWL) lists that is designed  to level students within those lists.

Our version of the NGSL level test is comprised of 140 items, 20 for each of five approximately 500-word bands of the Core Vocab and 20 for each of the two bands of the Academic Word List.   It supports both an English version and bilingual versions for Japanese,  Turkish, Korean, Portuguese, and Spanish versions of the test.  We recommend the bilingual version if it is available in the students native language.   Try it out here:

We use a cumulative 90% correct threshold to determine the students “Vocab Level“, and then match students to one of 7 levels on EnglishCentral.   These seven levels can be mapped to CEFR, TOEIC or TOEFL, etc. scores as follows:

Students however usually don’t master vocabulary — that is commit words to their long term memory or enable productive use of the word — with one exposure.  Rather, multiple exposures are necessary over time in what we call Time Interval Learning.

The MyWords application is where the Time Interval Learning takes place on EnglishCentral.  All words studied in Vocab Courses (such as Core Vocab, or Academic Vocab)  — whether correctly or incorrectly answered — are added to MyWords, so students can study them over time.

Words are automatically ordered by “Ready to Study” based on the time interval learning algorithm.

Students can focus exclusively on words they got wrong

from the assigned Course or from Learn Mode or Quiz Mode in Video Lessons.  These “incorrect” words are automatically added to MyWords.

Students can also focus on words they have Favorited

during their study of the vocab course or while doing Video Lessons.  Favorited words are  also automatically added to MyWords.

Students demonstrate “mastery” of a certain number  of words during the course of their study on EnglishCentral using the Time Interval Learning System.    Mastery requires 5 correct learns over different time intervals.  The 5 time intervals set by the system are: 1 day, 3 day, 10 days and 30 days, and finally . . . mastery =